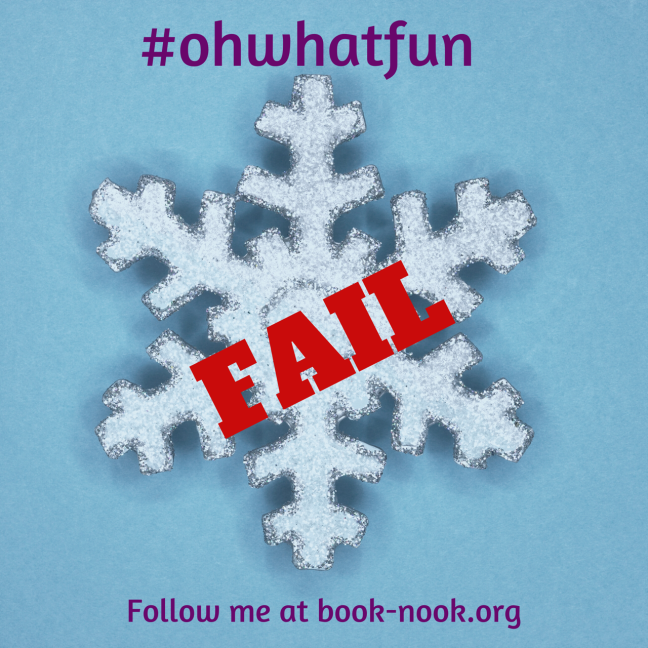 First, a warm thank you to Mackenzie Lane (@mackenzieashtonlane / YouTube.com/mackenzielane) for setting up the 2019 #ohwhatfun readathon. Secondly, a most humble apology for any time on any platform where I may have or may yet refer to the readathon as “ohwhatafeeling” (mental block). Now, on to business…

So for those who don’t know, the premise of this readathon, running from December 14 to 21 is to choose either the list of “Nice” challenges or “Naughty” challenges. I’m starting with the nice challenges and will move on to naughty if time allows (yeah, sure!). My unique approach is to work on all five challenges at once, which means I have to have books at the ready all at the start.

I will be posting daily updates on my Instagram (@heathers.book.nook) and will update my blog when a milestone is reached.

So much reading … So little time. Happy Holidays and Happy Reading to all those participating.

It’s a sad state of affairs when you manage to do less reading on a readathon than you have any other time since tracking your reading.

That being said, I did manage to wholly complete one challenge and will update on the rest.

Challenge #1 – Read a Book Set During Winter – Christmas Shopaholic by Sofie Kinsella – I am 62% of the way through this book. It’s a quick read and I was hoping to be able to pound away a few hours yesterday to get it done, but that just didn’t happen.

Challenge #2 – Read a Book With “Light” in the Title – What Light by Jay Asher – If possession is 9/10ths of the law, then I should be 9/10ths of the way through this challenge. The only part I managed to accomplish was picking this book up from the library.

Challenge #3 – Read the 25th Book on Your TBR – An Ember in the Ashes by Sabaa Tahir – I am 14% of the way through this book. It’s a much longer book than I thought. Fingers crossed I may actually still get this done by the end of the year.

Challenge #4 – Read an Entire Book in Christmas Pyjamas – Skipping Christmas by John Grisham – I am 11% of the way through this book. I thought for sure this would be my slam dunk because it seems to be a quick read, but the problem for me was that I wasn’t in my Christmas PJs very many hours of the week.

Challenge #5 – Read a Book Published in December of Any Year – Thirteen Reasons Why by Jay Asher – 100% Done this challenge… yay! Whoot-Whoot! Bring on the ticker-tape parade.

It was so much fun being a part of the #Ohwhatfunreadathon2019, even if I wasn’t very good at it… I’ll be trolling for someone setting up a first week of 2020 Readathon for sure.

The weather here in Southern Ontario has been up and down all month, and December is starting much the same way November did, with a big winter storm. Bad for trying to get my Christmas shopping in order, but great for starting another month with a good boost to my reading / blogging.

This was the first month I ever “read” via audio book… I will do a separate posting on how I feel about that experience. The purist in me felt that I was cheating by reading via audio book, but it is an easy way to get a few more books in a year. The following tracks my reading by media type. Hard-copy books (blue), E-Books (beige), audio book (grey).

A brief summary (no spoilers) and rating for all the books I finished in November, 2019 is below:

I gave this series 4.5-stars as a whole, with Clockwork Angel being my lowest rating at 4-stars and Clockwork Prince being my highest at 5-stars. Clockwork Princess falls somewhere in between, as it had some of the absolute best moments of the series, and some of the usual let-downs as things finally wind-up. Shortly after completing The Mortal Instruments, I purchased The Infernal Devices, however my heart just wasn’t big enough at the time to embrace a new Shadow Hunter series.

This was the first book read in my “Random Book from the Library” ongoing challenge. I’ve always liked the idea of finding a gem in the rough that I’ve NEVER heard of by just randomly picking a book from the library shelves or by starting at “A”… This book embraced both.

The story was much more compelling than I thought it would be, about a girl suffering from amnesia after having killed a close guy friend in a car accident. The story is largely about a calamity of events as the story of what happened that night starts to unwind.

I haven’t read a lot of books with an unreliable narrator, but this one was compelling in that she was so obviously unreliable in that you often were pretty sure that maybe she was stringing you along.

I gave this books 3.5 stars. Wasn’t entirely in my wheelhouse of books I like to read, but it was definitely an enjoyable trip into the less-frequented library shelves.

Zen-Sational Living: A Simple Guide to Finding Your True Self and Maintaining Balance – Sheila M. Burke

I don’t know what I expected of “A Simple Guide” with such an incredibly complicated title, but this book was disappointing. Usually I’m all-in on some good living zen advice, but maybe I just wasn’t feeling the topic this month or maybe this book really wasn’t that good. It took me a few tries over the past few years to get into it, and I’m pretty sure I only finished it this time through sheer will-power. I gave it 2 Stars.

Once again, maybe I’m just too into fiction right now to really appreciate a good non-fiction book… Or maybe it’s because I tried to do this one via audio book… Either way, this book I just could not keep paying attention to and eventually I called it as my first DID NOT FINISH of the year. No rating.

Irresistible: The Rise of Addictive Technology and the Business of Keeping Us Hooked – Adam Alter

This was the one exception this month to my non-fiction slump. I really enjoyed this book, although I’m concerned that maybe instead of scaring me away from the addictive behaviours it cautions, it actually drew me in more, with my new advances in blogging and instragram. Oh well, it was an interesting read and a good book overall. 3 Stars.

I’m Not Dying With You Tonight – Kimberly Jones

This was the first book that I finished as an audio book. At first I had a real difficulty with hearing the book in voices different than the ones in my head (cue mental health check), but I went for a long drive one day and found that with absorbing a big enough chunk at one time, the story held my interest. A decent story, but I do think that I may have liked it even more if I had read it instead of listened to it. 3 Stars.

This being the second book in my “Random Book from the Library” series, I wasn’t sure what to expect about this collection of short stories. But I LOVED IT! It was fantastic… By the halfway point I thought for sure this was going to be one of my favourite reads of the year. Unfortunately by the end I either got bored of the rah-rah-feminism vibe or the stories started to decline in quality and at the end of the day, this only got a 3.75-Star Rating.

This was the only re-read of the month. When I picked this book to re-read, I actually thought it was a different book, but 50 pages in I was pretty invested and decided to finish this series again. It’s not the most wonderful YA Fantasy book I’ve ever read, but the romance is pretty cute and I did enjoy this departure from some of the other materials I read this month. I gave it 3 Stars on the re-read. I seem to recall that the end of the series was disappointing so I’m mixed on getting back into book #2.

Get Your Sh*T Together: How to stop Worrying About What You Should Do So You Can Finish What You Need to Do and Start Doing What You Want To Do – Sarah Knight

Wow… that’s a mouthful. I didn’t even realize how long that title was. No need for a recap because that says it all.

I really enjoyed this book, which was the third book I finished in audio format. I think it’s the author who is also doing the reading, which is really fun. So much better than the other two audios and it really felt more like a podcast or just talking to someone (says something about my vernacular).

Anyways, this was a good, solid book and has interested me in trying the audio version of her other book “The Life-Changing Magic of Not Giving a F*ck”… I’ve read that one, but I think hearing her cadence will be even better. 4 Stars.

I Hate Everyone… Starting with Me – Joan Rivers

This was the third installment in my “Random Book from the Library” series. I thought it might be a light, enjoyable read and I was right. It was fine, but not quite as funny as I had hoped. 3 Stars.

This was my second re-read of the month, and my first “Reading What the Kids Are Reading” book. My daughter read this book and watched the movie 2 years ago and I don’t know if I finished the book along with her or lost interest part way through.

It was a fine story, but fiction geared to that age group is maybe just not my thing. I don’t have the same “outrage” response that some of my other mommy peers do. 3 Stars.